Library Services are available to all residents of Union Springs and the immediate surrounding areas.

The patron’s responsibility is to return materials by the due date. Books may be renewed by phone or on-line and the library offers auto-renew service. Reimbursement is expected on lost or badly damaged materials.

Community Programming is scheduled throughout the year. Story hours for children are presented during the summer.

To ensure equitable use of the computers, the Board has adopted a comprehensive policy. A portion of the policy includes:

The fax and copier machines are available for the public’s use.

A Brief History of the Springport Free Library 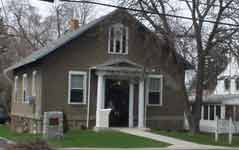 In 1898, a small group of civic-minded people formed an organization. The first meeting of the Trustees was held on October 24, 1898, and Union Springs’ first library was established in a single reading room above a village business. This room was open every evening and three afternoons a week. In November of the same year, an application for a State Charter was sent to Albany, and the next month the State Inspector of Public Libraries, approved the library, and declared that “a haven of refuge had been established.” In 1902, the library was given a State Charter and the name Springport Free Library.

The next step was for the Springport Free Library to move into its own building. So on June 15, 1910, the Library Association bought the Quaker Friends Meeting House for $450. Renovations were needed, and several fund raisers were held to raise the necessary funds, including concerts, lectures, and suppers. When the renovations were finished, volunteers moved in the furniture and books, and in a mere two days, everything was ready for the grand opening.

On December 31, 1910, the library was formally opened to the public, complete with an afternoon tea. The library became a charter member of the Finger Lakes Library System in 1958. Now the resources of all the libraries were open to the patrons of each library, and professional assistance was granted so that book, record, and painting collections became available.

“The years roll by and the tempo of life quickens. But the Springport Free Library still opens its doors to welcome residents of the area, as well as all who pass by….to enter, to pause, to read, and to continue on, refreshed and inspired.”

From the Bicentennial History of Springport and Union Springs, New York 1976.